Well folks, the time has come for me to move another site. Nothing will change, just the location!

Many thanks to DK for helping get me set up in my new diggs and for being my greatest support in this time of transition.

Tomorrow morning will be my first new post and in it, I'll reveal some very exciting news. You see, it's not just the blog location that's changing.

And no, I am not pregnant again :)

You can now find me at :
www.heylizjordan.com

Posted by Liz Jordan at 9:57 PM No comments: 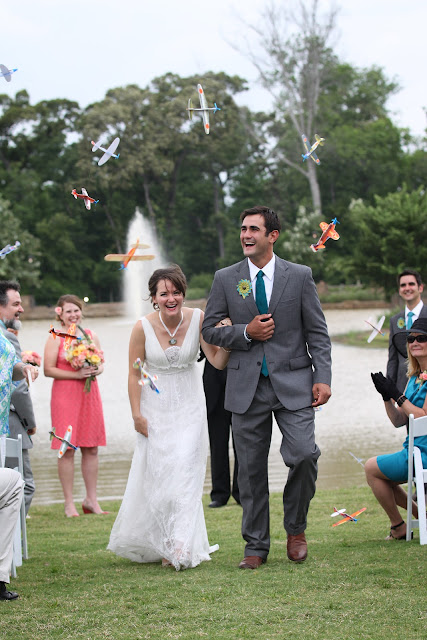 As a surprise to Andrew and Arwyn on their wedding day last April, I planted these airplanes with little notes saying "Assemble and toss me towards the bride and groom as they walk up the aisle!" on each guest's chair. Andrew my brother has been flying since he was a little twerp and is close to finishing up his pilot's license so it was a definitely a nice little personal effect. Awww.

Michael my brother-in-law shot the wedding with his fiancé Emily and captured this magical moment we will treasure for like, ever.

You can see Michael and Emily's photos of this wedding and more by clicking HERE!

Kinda random, but I'm missing these two today and realized I never posted anything about their amazing wedding!

Isn't he brilliant? This was shot from the roof of 1100 Elder, our church's new building.

Years ago when DK and I were newly dating, we spent the 4th of July with David, Kim and a couple other friends. To this day it's referred to as the best 4th ever because we had no plan but ended up on bikes darting all around downtown, layed in the grass on the lawn of the bayou near the Sabine St. bridge watching fireworks directly above us and wound up on a balcony with a view of the skyline at one of our favorite haunts in Houston listening to the best juke box in Houston. Ever.

It wasn't too much later that David and Kim moved to Malaysia. Since then we've always dreamed of either recreating that night years ago or even trying to top it.

Last year David and Kim moved back from Malaysia... but Kim and I were super pregnant. I think we watched the fireworks on tv? But I don't even remember.

And this year was going to be special regardless as it was the girl's first 4th of July ever! Kim and I spent a few hours each decorating the girl's individual bike trailers for our neighborhood's annual 4th of July bike parade. They both were styling and the parade was a blast! DK was actually supposed to work that morning but his shoot was cancelled at the last minute so he scrambled to get his bike and costume ready for the parade. My brother David showed up as Abe Lincoln and everyone wanted their photo with him! And wouldn't you know it, after the parade, awards were handed out and to our hysterical laughter and amazement, Second Place in the adult category went to "The Guy With The Huge Flag" (DK) and First Place, naturally went to Abe himself.

Kim and I were thrilled for our winning husbands yet naturally a little bitter over the fact they'd spent 5 minutes each on prepping. And our fancy bike trailers didn't even place. (The jury is still out on whether or not there was even a category for us, so we decided that we tied for First Place.) 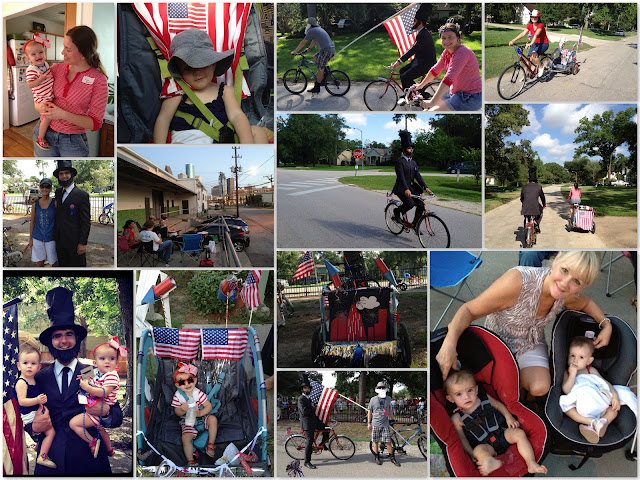 From there we relaxed and watched movies at Dave and Kim's while chowing down on burgers and mom's famous potato salad and apple strudel. Later on after long afternoon naps, we all met up again and drove to our church's new building near downtown and watched the downtown fireworks from there while DK was on the roof shooting footage for the church. He said from there he could see fireworks at the Galleria, Miller Outdoor and a few other places. I love this city!

It was an incredible day with my family and I feel so blessed to have them all in my life, especially now that Jordan and Amelia are part of our world now. Those two make everything new, exciting and absolutely fulfilling.

Hope your 4th was the best ever!

Posted by Liz Jordan at 1:10 PM No comments:

So, yesterday Jordan and I were driving around Houston collecting supplies to decorate her bike trailer for the 4th of July bike parade in our neighborhood. It was a fantastic day and all around town I could hear her giggling and babbling nonstop from the backseat. We stopped at a few craft stores and on our way to Arne's as we turned down Studemont from 11th St., this nostalgic emotion and sense of pride welled up inside of me.

Initially I thought, "Oh, that Amos Lee, he's an emotion stirrer!" He was on the radio right then singing about windows being rolled down. But this actually happens a lot, the sense of pride and love for this city that washes over me each time I turn onto a street that I feel I owned, where I committed one of the greatest accomplishments of my life. I ran a marathon on that street.

Last year I was about 8 months pregnant on Mother's Day and DK gifted me with this children's book titled "My Mom". In it are pictures and details from the little girl's perspective listing the coolest things about her mom. Reading the book that morning for the first time, emotional as ever, I turned the page to find this mom bursting through a finish line as the little girl exclaimed "She's got lots of medals for winning first place!" 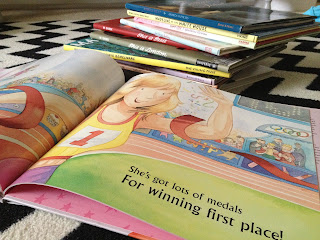 Silly as it is, this has remained a motivating and inspiring visual for me as a mom, to always have wild personal goals and focus, even aside from my accomplishments as a mom. I want so badly for Jordan to be proud of me. But I also want to be proud of me.